What is the RepRap

In short: It is a 3D printer capable of printing it’s own parts. Its operating principle is a computer controlled glue gun that can move in 3 directions (X, Y and Z). Z is the height coordinate and the RepRap ‘screws’ up/down a platform that is connected with 4 nuts, one on each corner. The X and Y are the horizontal carriages. Besides that it precisely controls the amount of plastic that the ‘glue gun’ extrudes (spits out). It’s not really glue, but thermoplasts (plastics that are deformable when hot, solid when they’ve cooled). The thermoplasts fuse together stream by stream to form a layer. The Z-platform is lowered a fraction with each layer. The picture on the right is an example of what it makes: it can print its own printing toolhead. 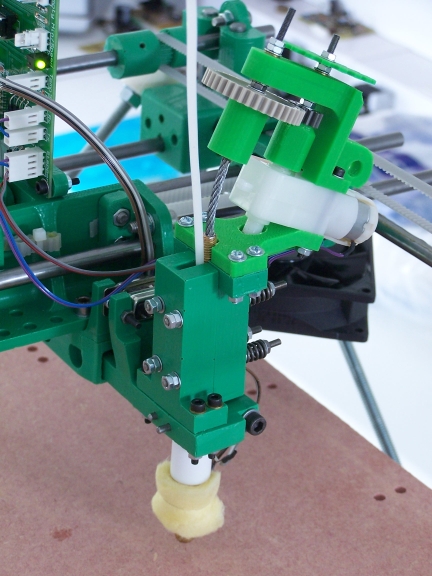 It has printed its own printing toolhead…

What is cool about the RepRap

Because of Self Replication, this project has to potential for exponential growth. If people print parts for a couple of their friends (a-la Pay it forward) they can use and improve RepRaps. Keep in mind that this is a first generation designed and built by a few people. RepRaps become better at a increasing speed as more people improve it, and there are more people that improve it because it’s user base extends at a growing rate. All users will be able to keep their system updated by downloading latest designs and printing those upgrades. If you were to model this as a System Dynamics model, there are several reinforcing loops.

Growth for the sake of growth?

Growth for the sake of growth is all too common. There have to be other benefits. There are 3 aspects that make this project worthwile:

I have no doubts that in the future, EVERYONE, will have a 3D printer in his home. One day, computers were for a few big corporations and institutes only. Right now most people cary more powerful devices around in the form of a phone, laptop, iPods, etc. The have become:

The same, I believe will happen with the RepRap. It will handle more materials, be more robust, etc. And if this takes of, all this valuable intellectual property will be public domain. No one can own and restrict ownership or distribution it for personal profit. Many printable objects will become freely available just like free MP3s are more and more common. 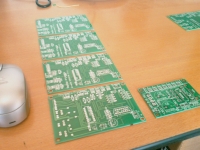 Electronic supplies took 2 days from the US based Mouser to the Netherlands. Also, Zach Smith was pretty fast with his shipment of PCBs (also 2 days after I knew he shipped it). Doing all the ordering via the BoM (Bill of Materials) tool reduced the ordering process to a few clicks. The shipment of plastic Moulded parts for the RepRap takes a little longer because Ian Adkin unfortunately (mostly for them of course) had an ill co-worker.

All together I expect to spend about 500 euros. This is higher than the 400 euro mark, because I also ordered all the parts that someone with a RepRap could make more cheaply. 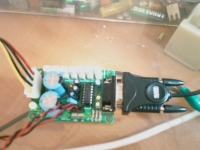 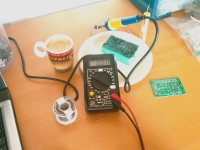 Soldering the first board was very easy. All instructions are very detailed. If you have experience with electronics you have to be careful not to skip the explanations and just build it the way you think you’re supposed to. My advice (if you’re somewhat chaotic like me) is to follow the instructions step by step: they are well thought out and you’re almost certainly going to forget something somewhere…

Subsequent boards are simple as well. You need 5 controller boards (in the PIC based electronics variant, there is an alternative). 3 boards are for the X,Y and Z axis, 2 for the two extruders/toolheads that you can use. All boards are the same up to a certain point. At this point the X, Y and Z boards are finished as stepper controllers with a synchronization link between them, and the extruder controllers to make temperature measurements, regulate a heating coil, control a fan and to regulate extrusion speeds (a DC motor). Stepper motors are different from the well known DC motors. Look at wikipedia if they are unfamiliar. 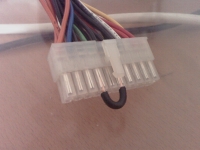 Important tip: If you’ve clipped off the end of wires, make sure they don’t fall on anything that is connected to the power. Clean up before you put powered PCBs on top of those things! If you don’t you might end up damaging things. Most ATX power supplies have a short circuit protection and turn themselves off. You need to unplug the motherboard short (ground/black to green wire in my case, but check to be sure). A video of adapting your PSU can be found here. On the right is my High-Tech ATX PSU conversion deviceTM (also called a wire) that enables the PSU without a motherboard attached.

All added up: It took me about a full day to finish the electronics and test it. Depending on experience this may vary from 0.75 to 3 days.

The entire RepRap is using a maximum of about 50 Watts:

This kind of power usage is not optimal, but certainly acceptable for now. Better tracking of the X, Y or Z axis positions would allow the hold torque to be minimized. If the steppers would skip this is not a big problem since the software would know about this. 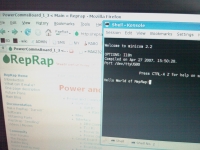 I created a programming cable to do ICSP (In Circuit Serial Programming). Now I can use the PicKit 2 from Microchip.com to program everything. I use “pk2cmd” to use this programmer on linux. 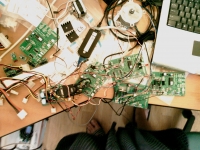 The software was a bit of a hassle. As always, this was not the software’s fault. I am especially good at breaking and then fixing things again. It turns out I had no working GLX support, my nvidia driver didn’t work well under linux. I’ve had it working and fail again over the last few ubuntu distro’s and kernel updates. I think my own fixes or workarounds to problems interfere with things that the Ubuntu team improves. A nice extra is that I’ve got my fancy (and arguably useful) compiz features back (see movie for an impression and to see why windows vista is “soooo 2007”)!

Finally, here’s an image of my progress so far… I’ll keep you posted!